We were always aware that midweek in Manchester during the winter term was not
an ideal date. But we were delighted that over 80 people attended the first ever UK
KLS Meeting. For many it was the first time they had spoken to or met anyone else
with KLS and it was an incredibly moving experience for all of us. For those who
braved the snow and arrived early there was time to meet up for coffee and
exchange stories. Then over to Manchester Central Convention Centre for the
Meeting.

The session was introduced by Dr Catherine Hill, one of KLS Support UK’s medical
advisers It was thanks to Dr Catherine Hill and Professor Paul Gringras, also our
medical adviser, that we had this opportunity as they were Co- Chairs of The
International Paediatric Sleep Association (IPSA) Congress 2012.
Professor Emmanuel Mignot
The first speaker was Professor Emmanuel Mignot of Stanford University who
reported on his latest research into Kleine -Levin syndrome. He gave background
into KLS explaining that KLS is exceptionally rare (less than 500 cases reported in
50 years) although he considered that it may not be quite so much rare, as
underdiagnosed. It predominantly strikes adolescents with 70% male and tends to
spontaneously disappear. The cause is unknown and there are no effective
treatments.
Professor Mignot spoke about his research into genetic links and autoimmunity. We
cannot report the specific details of his research as it is unpublished and we
obviously want to support his research. Although there may have been
disappointment that there were no answers as to the cause of KLS, Professor Mignot
is committed to working on KLS and getting answers and new treatments. Professor
Mignot reiterated that the more good blood samples that can be provided the more
chance there is of finding the answer. 26 people gave their blood which was flown
back to America in the early hours by Mali Einen of Stanford University, who had
flown in especially.

The second speaker was Dr Isabelle Arnulf, of Pitié- Salpêtrière Hospital, who had
flown in from Paris for the day to speak to us. She impressed everyone with her
understanding and empathy. She set out the revised definition of KLS, from the
International Classification of Sleep Disorders, which will be published in 2013 (and
can be seen on the KLS Support UK website). She explained her study of cases of
KLS and the management of KLS. She stressed the long periods of sleep (over 21
hours) a symptom which is not seen in other diseases and the striking feature of
apathy. Her slide showing pictures of teenagers not doing normal teenage activities
such as showering, putting on make-up, using mobiles and playing computer games,
resonated round the room. She explained that EEG results are abnormal in 70% of
KLS patients. Brain scans showed differences between different patients and
between different episodes which may explain differing symptoms.
Her main recommendation was that during episodes people with KLS should be
cared for at home, in a safe and familiar environment and left to sleep under family
supervision. She advised they should not be over-stimulated as “the brain is
suffering”. She stressed that they should not drive. She confirmed the need to
reassure them that the episodes will end particularly if they were depressed. She
explained the rare situations when hospital care may be needed. She examined the
various treatments that have been tried during episodes but advised that they were
not effective.
In between episodes her main advice was to avoid infections and alcohol and to
maintain a regular sleep routine. She advised that no drug had been proven to work
to prevent episodes although in certain cases with frequent episodes she believed
some of her patients in France had benefited from lithium although it is required to
be extremely carefully prescribed and monitored.

A brief update of past and current news was then given.
KLS Support UK was originally co-founded by Adele Clarke, Caron Krieger and
Annette Robinson in February 2011 when all three of our children with KLS were in
episodes. We decided that we did not want any other UK family to struggle through
this worrying and isolating experience alone, so the idea of setting up KLS Support
UK began. In August 2011 we launched the website which was created by James
Robinson.

KLS Support UK became a small charity in June 2012 and the first trustees were
Rick Ball, Adele Clarke and Caron Krieger. Annette Robinson has not yet become a
Trustee (due to ill health) but we hope this will change in the near future and in the
meantime she continues to sponsor the website.
We are pleased to announce that we now have a fourth Trustee - Professor Beverley
Hunt, whose son also has KLS. Beverley Hunt is Professor of Thrombosis and
Haemostasis at Kings College London, Consultant in the Departments of
Haematology, Rheumatology and Pathology and Director of the Haemostasis
Research Unit at Guys and St Thomas Foundation Trust. She is also co founder and
Medical Director of Lifeblood, the Thrombosis Charity, which was voted "Health
Charity of the Year" at the 2010 Charity Awards. Beverley was disappointed not to
be able to join us at the meeting.

Our aims as a charity were reiterated.

We hope that the website is helpful, both as an initial point of contact and for
information (we would encourage you all to keep visiting the website in order to raise
its profile). Via the website we have managed to speak to many people and we
wanted everyone to have the opportunity to meet other KLS families by organising
the meeting.

We want to raise awareness with the public so that any families struggling to find a
diagnosis are able to recognise KLS. We direct media requests to families who are
happy to take part in publicity. We appreciate the efforts of all the families who have
been involved in publicity, both in the past and recently. We would particularly like to
thank the Ball family and the Baldwin family who have both been involved in
television programmes which we played on our stand at the IPSA conference. If
anybody agrees to take part in publicity in the future please remember to insist that
the article includes our website link so that new families can find us.
We are also working to raise awareness within the medical profession. Last year we
took an exhibition stand at the British Sleep Society Conference at Cambridge
University, where we were able to talk directly with medical professionals about KLS.
As a result of some of those conversations, we had several new families contact us
to say their children had since been diagnosed. It was during the BSS conference
that Dr Paul Gringras first suggested that we attend the IPSA congress. In the future
we will also aim to target conferences for paediatricians, neurologists, psychiatrists
and GPs.

We support research with the aim of finding the cause, treatment and ultimately a
cure for KLS. We are currently working alongside a team who are hoping to apply for
a Research Grant in the UK and we hope to be able to update you soon.
In the meantime please can you continue to support the research at Stanford by
contacting Mali Einen to find out how to take part or by completing questionnaires if
you have already given blood samples

The new leaflet, which had been kindly reviewed by our medical advisers and
speakers, was distributed. It is available for download from the website: leaflet.

We then offered the chance for people to ask questions of a panel which comprised
Rick, Adele, Caron, Annette, Dr Isabelle Arnulf and three people who have suffered
with KLS – Louisa Ball (17), Lily Clarke (22), and Billy Higgins (32). Dani Farber from
the KLS Foundation had hoped to join us but was unable to do so.
There was a lot of participation and interesting questions and discussion on
obtaining a diagnosis, medications, care during episodes and education. We all
wanted more time to chat informally but unfortunately some people had long
journeys back home. 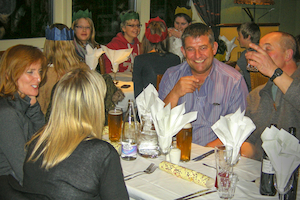 Some were fortunate to be able to stay
for a relaxed meal and the chance for
KLS friendships to be built upon. The
evening was a roaring success which
finally drew to a close just before
midnight. As parents, knowing how
isolating KLS is, one of the highlights
was watching the table of youngsters
laughing and enjoying each other’s
company.
It was such a shame that not everyone
could come to Manchester or was able to
stay and our hearts went out to all those
in KLS episodes. 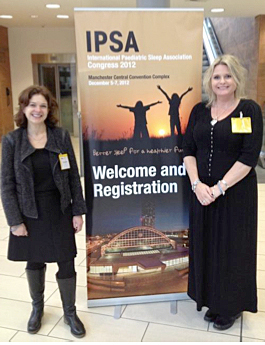 The next morning Caron and Adele set up the stand at the IPSA Congress and met
with sleep doctors and specialists from around the world to spread awareness of
KLS and distribute leaflets. Once again we were able to have conversations about
KLS with many staff working in the various sleep centres around the country.
We were also able to introduce Professor Beverley Hunt to Professor Mignot so that
they could discuss research.
We also had the chance to speak to
Professor Paul Gringras and it was
encouraging to hear from him that, in his
opinion, KLS Support UK attending
conferences is an effective way of raising
awareness of KLS amongst the medical
profession.
We were pleased to catch up with Dr Mike
Farquhar who attended the KLS
Conference in California last year and is
about to take up a post as Consultant at the
Evelina Children’s

Thank you to everyone for completing the feedback forms and commenting on
Facebook. We know that everyone is keen for another chance to meet up next year
which we will start to investigate. It is likely to be held in London and we will do our
best to hold it on a weekend although this may limit the possibility of doctors
attending to speak. We will keep you informed with any progress.

Getting involved and fundraising

We do know time was short and that people had a lot more to discuss including how
to get involved, particularly in fundraising. We welcome your ideas and if you would
like to talk to us please contact us or e-mail us.
We really appreciate your support as we are a small charity, run by volunteer parents
of children with KLS, which is currently self–funded and has no grants. Thanks to
Karen Stanley (mother of Beth) who has offered to help with fund raising and Helen
Renouf who has set up a KLS Support UK account with easyfundraising. It was
great to arrive back from Manchester to find Easyfundraising’s first cheque. To find
out more about donating to KLS Support UK through Easyfundrasing click here.
Thanks also to Stacey Comerford who raised money with the first KLS Support UK
sponsored walk in the summer.

Finally we would like to wish you all Season’s Greetings and a Happy and Healthy
New Year with all your loved ones well and free from KLS episodes.
Richard Ball, Adele Clarke, Beverley Hunt and Caron Krieger