Gemma talks about her experience of KLS.

Online and page 23 of the Daily Mail newspaper, Tuesday 29/11/16. The story spread far and wide on the internet. 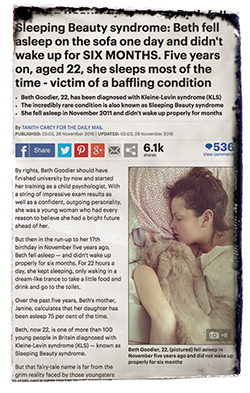 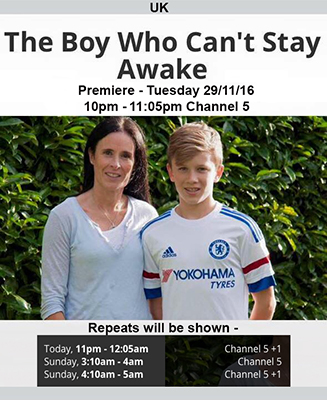 Jog'on Buddy is running 60 miles on 8th July 2016.
His fundraising page can be found here

KLS in the News

Beth's story was covered again...Pick Me Up magazine, in the health section...out on 5th March 2015

On Monday 2nd February 2015 there was a programme about sleep disorders on ITV, Wales This Week. Amongst other sleep disorders KLS was mentioned. To see the full programme, 'Sleeping is the Enemy', click here

Thank you Beth, a KLS sufferer, and her mum Janine for spreading the word about KLS. They were interviewed live on BBC Breakfast TV and were on BBC Inside Out North West. For this they were filmed earlier in the year and it shows Beth in an episode. Their video reached enough people to be classified in Best of YouTube with over 350,000 hits. The information was also translated and shown in parts of Europe and even reached the Far East. Thank you and well done for spreading the word about KLS to so many.

Thank you Sally Williams, BBC Inside Out North West for allowing us to use the video.

Beth and her mum Janine took part recently in a radio interview with Sam Walker on BBC Radio Manchester.